I started performing comedy and spoken word sets on the small-scale cabaret and comedy circuit. I premiered my debut solo show, Reshape While Damp, at the Edinburgh Fringe.  Following a great reception, I took the show to FIRST: a Festival of Solo Performances, at the Tristan Bates Theatre, London. I also headlined Change, a festival of new writing for Pulse Ensemble Theatre in New York.

I’ve gone on to write and perform my own work across the UK.  I enjoy experimenting with style and content and finding out what works well for audiences in different settings. My performance incorporates monologue, spoken word and song, and my stories can be poignant, surreal and funny – sometimes all at once.

In 2018 I had a very successful 2-week run at the Edinburgh Festival Fringe with my solo comedy theatre show, Despite Everything, Price Still Includes Biscuits. I also toured a story-cabaret show Truth and Truffles during 2017-8 through Live and Local,  performing songs and true-life stories in rural venues with storyteller Cat Weatherill.

2019 was also a busy year. I toured the solo show to Wolverhampton, Leicester, Birmingham and Burton-upon-Trent.  I had a great run at the Brighton Fringe in May and the Buxton Fringe in July, with  brilliant audiences all round.  I had another excellent 2-week run in August at the Edinburgh Fringe.

In July, I delivered a creative travel writing piece and performed poetry at the Borders and Crossings conference at the University of Leicester. In the autumn, I co-organised and performed in the very successful ‘pARTy Lines – a Literary Cabaret’ for Birmingham Literature Festival.  You can read a blog about it here

I also took my solo show to South Scarle Community Centre near Newark and performed a work-in-progress ‘Whose Christmas is it Anyway?’ for PILOT Nights at Warwick Arts Centre. I performed the piece again in Loughborough and Burton-on-Trent to very appreciative audiences.

2020 began with a great show in Leicester at the Cosy Club.  But after that, so much was cancelled or closed due to the spread of Covid-19,  If you are reading this, I hope you are safe and well.

During August and September 2020, I had a wonderful time as part of Live and Local’s ‘Living Room’ project.  I worked collaboratively with residents in the ‘new’ village of Meon Vale in South Warwickshire to create a spoken-word piece for the community.  Entitled ‘Snapshot Stories,’ the piece is based on true-life stories and experiences during the pandemic and also celebrates the place and its environment. We had a great response from the community and we collected material, recorded and filmed in Meon Vale during the 2-month period. BBC CWR featured the project on ‘Coventry Creates.’ In December 2020, following an active and public residents’ campaign, the community in Meon Vale learned that the development plans for the woodland had been withdrawn.

In January 2021, the film was featured in an online festival with theSpaceUK and was also shown online at the Brighton Festival Fringe and the Buxton Festival Fringe. You can read a review from Buxton Fringe here: https://buxtonfringe.org.uk/reviews2021fil.html

In September, I delivered a creative travel writing piece at the Borders and Crossings conference at the University of Kent.

It was great to be back on the boards again with the first performance of 2022 at Waingroves Community Centre, Derbyshire via Live and Local – and I’m looking forward to being back in-person at the Buxton Fringe 15-17July with my solo show  ‘Despite Everything…..’
Scroll down here for online booking links.

Listen to an interview with Paul Levy of Fringe Review about my work  – both writing and performing – recorded in Edinburgh in 2016. There is a more recent interview recorded at the Brighton Fringe 2019  here 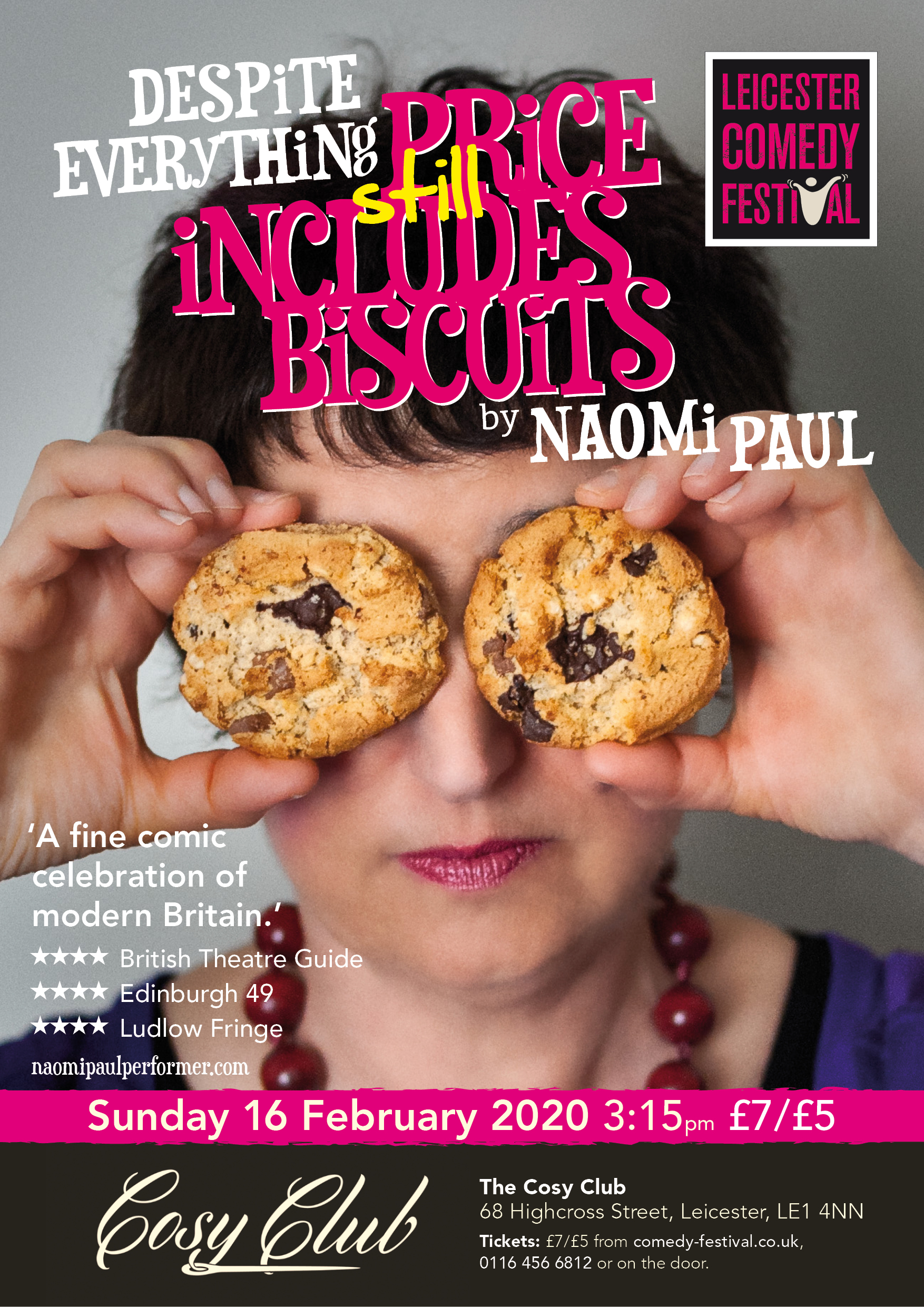 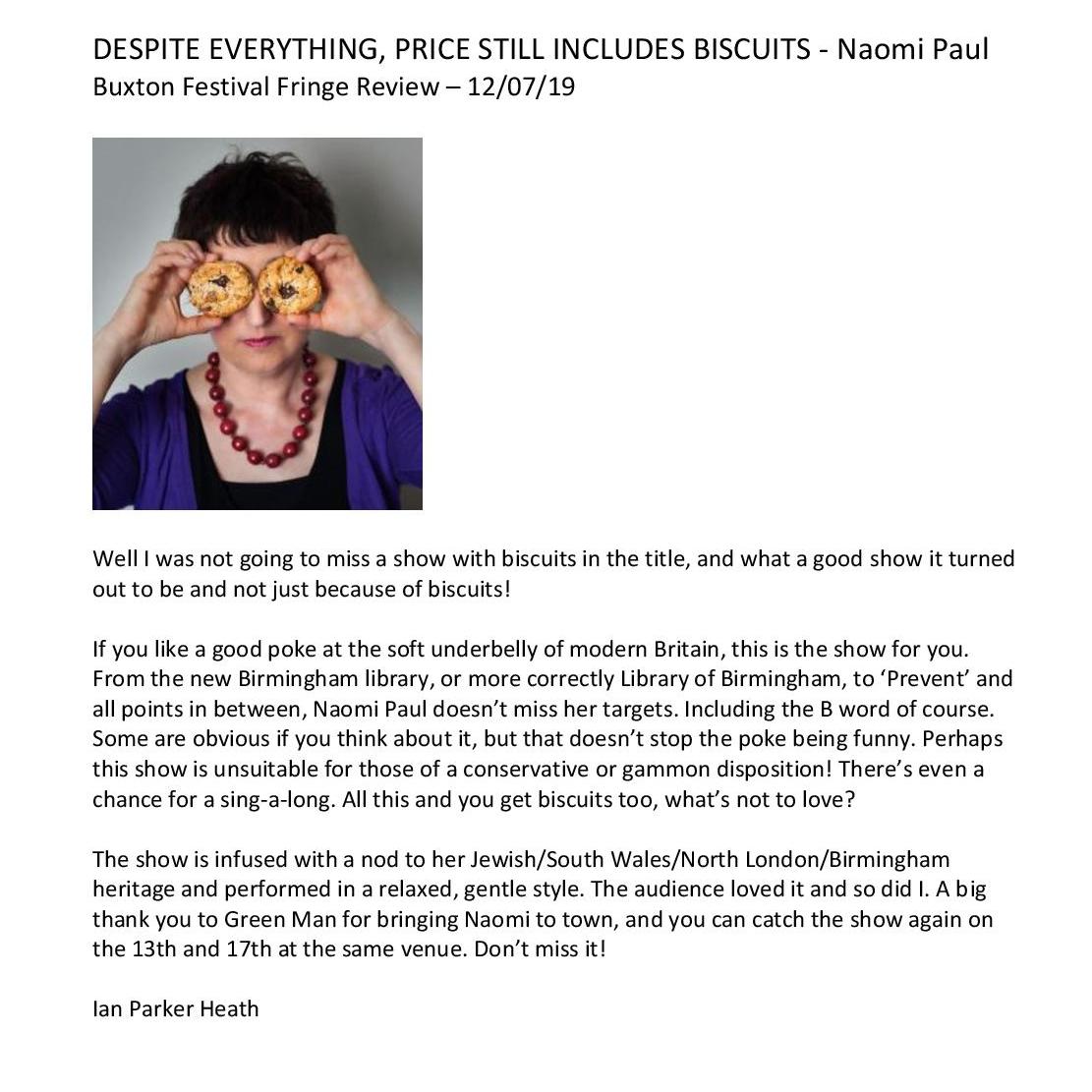 ‘A sprinkling of nicely observed Victoria Wood-style songs add to the charm of her multi-layered subtle little show.’

‘Paul’s deadpan delivery casts a spell over her audience.”

‘Naomi’s style of delivery is gentle, engaging and alert to audience responses Indeed the point of the biscuits she hands out is to provide a short break in which we can talk to each other. This is a fine comic celebration of modern Britain,  whose only comic victim is the odd Government minister.’

‘Terrific deadpan delivery of material that is topical and relevant. Audiences loved it!‘

‘Naomi Paul wowed the audience with her own brand of deadpan Jewish humour.’

‘A quietly intelligent and entertaining show… highly recommend it. She is wonderful!’

I’m an experienced workshop leader, facilitator and teacher, working with a diverse range of participants in various settings.

‘Her writing, performance and considered wit guarantee a great session.’

‘The air buzzed with creative tension as we scribbled away.’

I’ve given workshops for Writers Without Borders on the structure of poetry and using humour. I also deliver performance workshops to help participants develop their stories for an audience, and co-ran a short course for Writing West Midlands called True Words – Personal Storytelling.

‘We astonished ourselves with the actual and potential humour in what we managed to create.’

‘The kindness, openness and gentleness of the group. An excellent place to try out difficult things.’

If you would like to book a performance or workshop, please use the form below and I’ll send you more information.